Black Out, White In. Science fiction in Brazil 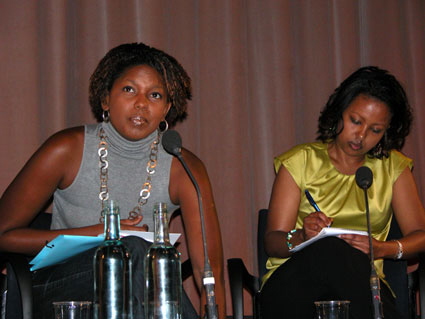 Adirley Queirós' high-concept, lo-fi futurist docudrama explores the trauma of victims of racist violence in Brazil
Set in Ceilândia, a city established by the Brazilian government to prevent the poor from settling in the capital of Brasilia, this biting critique of race mixes science fiction with testimonials from two men physically disabled by police violence in 1986. A “researcher” from the future comes to collect evidence against the state, and the pair give testimonials of their lived experience; meanwhile, an act of terrorism against this “apartheid” is being plotted… Queiros’s take on Afrofuturism is subtle, ingenious, and utterly contemporary.

Adirley Queirós' film is best described as shantytown sci-fi. Transforming a "suburb" of Brasilia into a ghostly no man's land, tl migrants from moving into the Brazilian capital. What was once dressed up as an urban planning strategy has slowly revealed itself to be a move aimed at limiting the freedom of movement of the mostly non-white have-nots, and it's perhaps hardly co-incidental how state-backed violence have literally reduced the mobility of the film's two protagonists. Both victims of brutal assaults by the police in the mid-1980s, musician Marquim (Marquim do Tropa) is now wheelchair-bound while ex-dancer Sartana (Claudio "Shokito" Irinaeus) walks with the help of prosthetics. The pair are tailed by Dimas (Dilmar Duraes), an agent arriving - via a time machine in the shape of a cargo container! - from 2073 to derail the "Big Boom" which will change the country's future forever.
Just as Interstellar conquers the galaxy with its Imax-catering budget, Queiros and his producer-designer Denise Vieira have countered that by producing a well-crafted vehicle about the future with canny twists of the present. Their efforts in conjuring the future through ingenious representation of the ordinary and mundane - Ceilandia's empty roads crissed-crossed by an overhead railway; Do Tropa's self-built home to facilitate his handicap; Sartana working with mountains of plastic limbs - could be seen as a 21st century Brazilian take on Afrofuturism, with Queirós' subjects (or collaborators) the logical heirs to Sun Ra, Afrika Bambataa or the Black Audio Film Collective. White Out, Black In is an understated wonder, its voice - the director's and the characters' - deserving to be heard