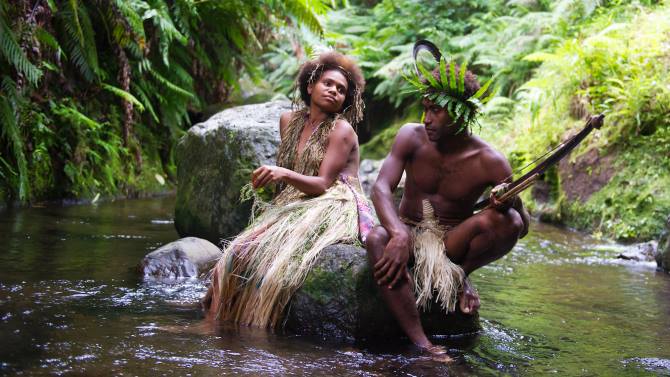 Part of African Odysseys at the BFI

The first-ever film shot entirely in Vanuatu tells a story of forbidden love, rites of passage,global warming, respect for elders and African sprituality.

The eternal story of young lovers breaking all the rules and risking everything to be together is beautifully told in “Tanna,” Based on dramatic events that took place on the volcanic island of Tanna in 1987, the film weaves fascinating details of African life into a universally accessible and emotionally affecting romantic drama. Very well performed by non-professionals drawn from communities whose history is represented on screen, following its Venice world premiere, and has a shot at niche theatrical play in selected markets. The film’s most visually striking sequence finds Wawa and Dain standing at the mouth of an active volcano. According to beliefs on Tanna the volcano is home to Yahul, a Spirit Mother whose aura teaches wisdom, respect and knowledge.
Very much about female experiences and rites of passage in a society whose foundations are shifting, the film surrounds Wawa’s daring actions with enriching observations by her mother and grandmother

Part of the film’s success can be attributed to events that took place long before cameras rolled. The producers spent seven months living with the Yakel, a people whose customs and lifestyle have changed little for centuries. During this time the filmmakers were told of a great love story from the recent past.
Plus Q and A